My name is Menya, like Kenya with an “M”

and I help busy professionals struggling to get in good shape by teaching them the skills and habits necessary to control their diet, improve their fitness, and win back their health forever.

As a health coach, father, trainer, and small business owner living in Tokyo, Japan, I know how difficult it can be to balance work, family, and health as well as an increasingly busy schedule.

I began my career as a fitness professional in early 2011 and have developed as a health and fitness coach thanks to books, seminars, courses, and mentorship from professionals across the world.

Over the past 8 years I’ve helped thousands of people and some of the most respected companies in the world make healthy lifestyle choices as the founder of MH Health Coaching, co-founder of SOGO Fitness—a non-profit fitness community—and co-founder of CoFit Movement—a Tokyo-based corporate wellness startup. 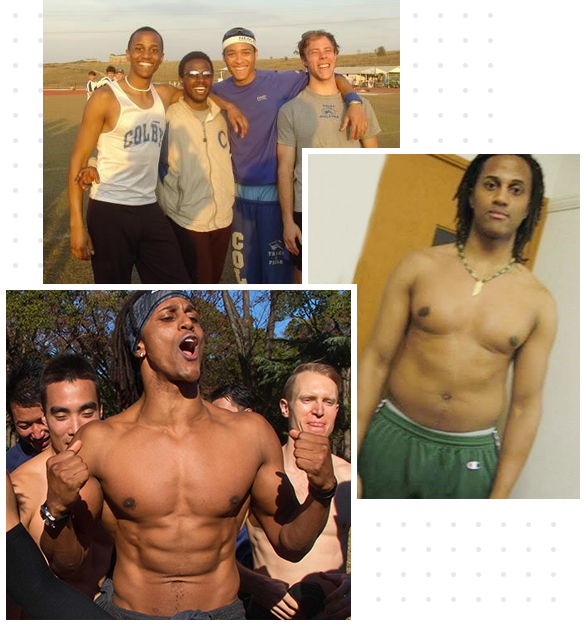 I always loved to exercise but never imagined that I would be a health coach.

Born near Boston to parents from Kenya, I was always interested in sports, music, video games, and girls. I excelled as a runner and dreamt of competing in the Olympics but I never understood how to eat, train, or properly take care of myself as a budding student athlete.

I graduated from Colby College with two degrees—one in Music and one in English—and the intention of attending law school until I realized that I needed a break from academia. So during my final year of college I booked a one-way ticket to embark on a new chapter in a distant world.

After 18 months of working as an English teaching assistant at a number of Junior High Schools near Nagoya, Japan, I realized that English teaching wasn’t for me. So I packed my bags again and moved to Tokyo where I made a living as a freelance model and musician for nearly a year. It was the wildest year of my entire life but I eventually transitioned to a career in another exciting area of interest: Fitness.

These pictures were taken over an 11 year timespan. The first is from college, the second is from Nagoya, and the third is from Tokyo.

When I was younger I thought it was impossible to build muscle because of my Kenyan genes. Then I moved to Japan determined to get in great shape but just became chubby and frustrated instead.

It wasn’t until I carefully studied and experimented with strength training, sports nutrition, functional movement and more that I finally acquired the tools and confidence necessary to overcome years of self-doubt and build the body that I had always wanted.

And it’s because of those years of frustration and disappointment that I’ve chosen to share what I’ve learned with others and give them the support that I wish I’d had when I was in their shoes.

What I’ve learned along the journey is that seeking help is a strength, not a weakness, and that anything is possible if you’re willing to ask questions then take appropriate action. So today I’m honored to share my passion with people from all corners of the world.

At MH Health Coaching we work with busy professionals using a proprietary system called the Holistic Fitness Program to help them eliminate confusion and learn to control their diet so they can transform their bodies and lives forever.

The science-based system is based on the Holistic Fitness Principles, which are based on 8+ years of study and first-hand experience in the field of fitness. This approach to health is from multiple angles including sleep, stress, nutrition, supplements, hormones, movement, cognitive function, emotional stability, and environmental exposures, in order to create deep understanding and optimize client results.

If you’d like to apply for the Holistic Fitness Program, schedule a free consultation here.

How To Apply For Coaching

The Holistic Fitness Program™ is an invite-only online program consisting of 1-on-1 coaching with Menya to help you reach your health-related goals.

READ CAREFULLY: To be invited to the Holistic Fitness Program, you must first book a free Discovery Session. This is an opportunity to create a framework for achieving your goals and an informal interview to determine if you’re a good fit for the program.

Note: All applications are reviewed by Menya and none of the information shared will be used for any purpose other than to optimize your coaching experience.

We recommend following along with the free e-book companion

Start the video training to access your free e-book

Where Should We Send Your Free E-Book Training?